The innovation of plastics has made life far more convenient for everyone, so much so that plastics are among the most traded commodities in the world. The diversity of plastics has contributed to its widespread use throughout the world; plastics can be found almost anywhere you look from bags to phones to facewash. The most common form of plastics used in the Health & Beauty industry is microbeads.

Microbeads are tiny balls of plastic, typically smaller than 5mm, and usually found in body washes, toothpastes, and exfoliators. The microbeads used in personal care products are mainly made of polyethylene (PE), but can be also be made of polypropylene (PP), polyethylene terephthalate (PET), polymethyl methacrylate (PMMA) and nylon. Microbeads have slowly replaced many natural, biodegradable materials in cosmetics, in large part due to its cheap cost of production and easy accessibility. So what purpose do they serve? These tiny plastic beads don’t do much to help cleanse the body – but they do contribute to the cleansing / exfoliating feeling, so much so that companies are more than happy to incorporate these cheap beads as an alternative to the more expensive, biodegradable products.

Widespread use of microbeads in body washes, toothpastes, and other cosmetics does not bode well for the environment. Plastics do not readily break down when flushed down the drain, and the sewage system in place is not built to filter out these plastics. Once the beads are washed down the drain, they accumulate in the wild where an estimated 808 trillion pieces swirl down American drains every day. Researchers estimate that 4.8 to 12.7 million tons of plastic trash are being flushed into the environment every year, and this is believed to be a conservative estimate! Microbeads are exponentially adding onto the accumulating concentration of plastic trash, which is very harmful to the environment. Avoid microbeads if you can! 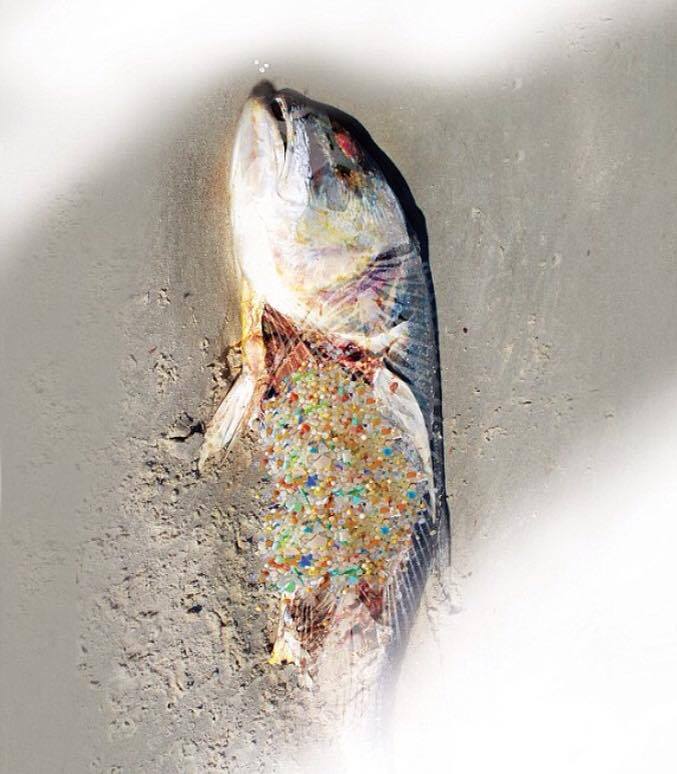 Microbeads are very damaging to the marine life as well. The tiny beads look like food to fishes and when ingested, causes reproductive harm to the sea life. The plastic beads also easily absorb harmful chemicals and accumulate at a higher rate than they would in water. Plastic microbeads absorb lingering organic pollutants (long-lasting toxic chemicals like pesticides, motor oil, and more) and other industrial chemicals that then move up the food chain when these toxic-coated beads are consumed by fish and other marine organisms. A single microbead can be up to a million times more toxic than the water around it! These same fish are then sold and eaten by the general public so keeping these tiny beads out of the sewage systems is in everyone’s best interest! Again there is no proven benefit of putting these plastic beads in cosmetic products. Dentists have expressed concern that microbeads added to toothpaste are getting stuck in patient’s’ gums, trapping harmful bacteria. Additionally, scientists in China found microbeads someplace they shouldn’t be: in table salt. Imagine finding these tiny beads in your food!

The good news is that microbeads are slowly being shut down by many new government policies. President Obama signed a bipartisan bill that prohibits selling and distributing products containing microbeads. The bill is intended to protect the nation’s waterways. These policies are a step in the right direction to help curb the environmental footprint left behind by millions of people. The right combination of research, awareness, and action has helped stop this potentially fatal environmental problem from snowballing into something worse. Although these policies will lessen the damage on the environment, public awareness and action is the best bet for stopping environmental problems existing everywhere so do your part and avoid these little plastic beads! Plastic pollution is a problem that can be controlled much more easier than other daunting environmental problems such as climate change so spread the awareness and avoid adding onto this plastic problem.

Join our Love Letter for 10% off your next order.Get first alerts on deals and new products!